“Nothing is ever truly useless; it can always be broken down and rebuilt. That applies to people too.”

Switch, also known by her real name, Su Bai, is a scavenger in the Garden. Her default vambrace power is Clone.

Switch is an artful illusionist that can create clones to throw the hunter off track. While she can use this ability to selfishly save her skin, Switch will willingly stay behind to help exhausted allies escape the hunter.

Scavenging blood gives Switch a surge of adrenaline and heightens her sense of awareness. After depositing blood, she’ll typically rush towards the closest body pile, where she can extract even more blood.

Her recovery skills are enigmatic; when Switch gets up after being knocked down, she gets back to scavenging as if nothing happened—despite having narrowly escaped death.

One way to survive in the ruins is as a Recycler - scavenging old tech and breaking it down into NPI. Su Bai takes that to the extreme, getting sent into The Bloodharvest for minor offenses, having her amputated limbs replaced with artificial ones, which she recycles when she returns to the ruins.

It takes a special kind of resourcefulness to be willing to sacrifice body parts to survive. 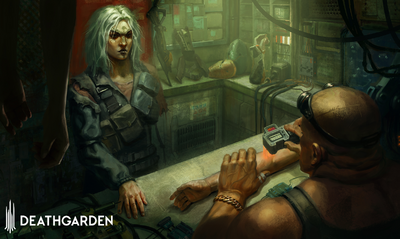 All over the world, people try to scratch out a living in the ruins. With resources as scarce as they are, this gets harder every day. Some have turned to farming, relearning the skills of the past and gaining nature's help in feeding their families. That trade requires a lot of space though, space that is hard to defend from the less-industrious. Roving gangs of bandits, and those who have set themselves up as local warlords, are always ready to help themselves to the fruit of others' labors. For the technically-minded, another way to survive is the life of a Recycler, like Su Bai. She lives in the ruins outside the Shanghai Enclave, dismantling old tech that she, or the people around her, scavenge. Once broken down and sorted, this can be recycled into raw Nanoparticle Ink (NPI) and used in jury-rigged printers to make new items. The job is long and tedious, the yields low and the by-products often highly toxic. For those with few options, however, it can be a lifeline.

Three years ago, Su was sentenced to a short period in The Bloodharvest for talking back to a Hunter patrol. While inside, she lost an arm, which was replaced with a printed one, so that she could continue to participate. When her sentence was over, she was was returned to the ruins and was surprised that the arm was not reclaimed. The Enclaves have such a surfeit of resources that they often don't bother to remove printed limbs from criminals.

Sensing an opportunity, Su Bai had the arm removed, recycled it and traded the materials away for food-capable NPI. The medical-grade NPI in the arm, coming directly from the Complex, was highly valuable in the ruins, so Su decided this was a valid new form of income. She settled into a routine of being arrested for minor infractions, entering The Bloodharvest, where her arm is replaced, serving her time, returning to the ruins, removing the arm and breaking it down for NPI. This has been so successful for her that, during her last cycle, she ensured that one of her legs was damaged enough that it had to be replaced as well, more than doubling her yield. It's only a matter of time until she has another limb removed.