"Make your own glory through their destruction."

The Inquisitor, also known by his real name, Tomás Guerra, is a hunter in the Garden. His power is the Anti Personnel Turret, and his default loadout is the Snake Bite and the Mauler 190. He can also use the TriSynkt .45C, once it is unlocked.

The Inquisitor is a cunning hunter capable of forcing scavengers out of hiding. He feeds off the fear of those who dare to oppose him, relishing in his preys’ suffering.

Tomás Guerra felt like something was missing from his life, until he joined The Pure, a fanatical group who execute the will of a charismatic leader.

Now he heads an inquisition, uncovering plots and quelling dissent with ruthless efficiency. Any who dare to oppose The Pure are located and thrown into The Bloodharvest, where Guerra hunts them down, for the final time.

His face may be hidden, but his gaze is penetrating. Pray that it does not fall on you. 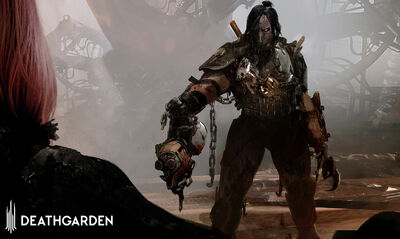 Tomás Guerra always loved being a Hunter, and was one of the highest ranked in São Paulo, but he often felt like the glory and accolades weren't enough; that he was destined for more.

Then Yeva Sushko took over the worldwide leadership of The Collective. She promised to bring her Firm into a new age, a true path that would result in the betterment of all mankind. Her magnetic personality quickly inspired a devotion in her followers that bordered on the fanatical.

A group formed around her, carrying out her will and crushing dissent. Tomás Guerra saw in them a cause, a purpose for his life, so he joined up. They became more zealous, living a monk-like existence, and calling themselves The Pure.

As The Pure gained strength and influence, Guerra moved quickly through the hierarchy. His dedication to Sushko's cause and his skill at weeding out members of Turning Point and The True Hunters, uncovering plots, and quelling dissent meant that he was soon leading the São Paulo Enclave's Inquisition.

His name has become feared, his methods swift and brutal. Anyone he considers a threat is immediately thrown into The Bloodharvest, where Guerra personally hunts them down, killing them with head shots to ensure that they cannot be resurrected. He collects the masks of those he 'cleanses' this way, wearing them as a warning to others.

Guerra was born with a deformity to his arm and had always chosen, in this age where limbs are replaced with barely a second thought, to retain it. He had kept it hidden, but now he uncovers it proudly, finally sure about who he is. In the Deathgardens, he allows himself to use a simple prosthesis, to make wielding a weapon easier.

In rituals, to reaffirm their clarity and commitment to the cause, The Pure scarify and mutilate their bodies, letting unclean thoughts leave through their sliced skin. Tomás Guerra goes further, employing a mechanism that continually cleans his blood, literally scrubbing him of corruption.

He keeps his face hidden by a mask at all times, as he considers himself unimportant - an anonymous weapon, doing the work of Sushko. He rarely talks, for the same reason, only speaking regularly to Sushko and other high-level members of The Pure. He does, however, speak to those he is investigating, and it's often said that, if you hear his voice, you're already dead.