Edit
watch 01:36
We're Getting Mutants in the MCU - The Loop
Do you like this video?
Play Sound

“Scavengers are simple enough to track. The stench of fear is all over them.”

The Poacher, also known by his real name, Declan Krefft, is a hunter in the Garden. His power is Proximity Mines, and his default loadout is the Passam Hacksaw T24 and the Jasper 67V.

The Poacher indulges in the sport of killing. He’s an expert in map control and, thanks to his extended stun field and hard-hitting weapons, close-range decimation.

The Bloodharvest is not a game, not even a way to gain entry into the luxurious life of The Enclaves. It's a portcullis, a barrier, keeping the sacred spaces from those who would sully their memories.

Declan Krefft is a gatekeeper, stopping incursions into his land with ruthless efficiency. He can smell your scent on the wind, track your footprints through the undergrowth, and uncover your hiding place.

The Deathgardens are his territory, and you are not welcome. 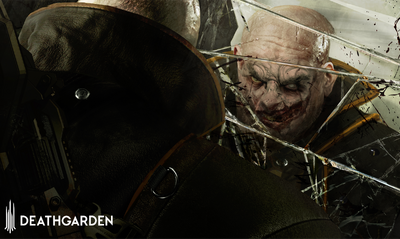 Some Hunters view the role as purely utilitarian, playing their part in a long tradition, and using it to advance themselves in the ranks of The Enclave. Others see themselves as gatekeepers, deciding who is worthy to enter The Enclaves. Some are more like judges or executioners, concentrating their efforts on meting out justice to those sent into The Bloodharvest for various crimes.

Declan Krefft is a resident of the Brisbane Enclave, the location of, and memorial to, Humanity's Twilight: one of the darkest moments in world history. He views Scavengers as trespassers on this sacred land, and his responsibility to be to remove them from it. Hunters usually wear battle suits, derived from those worn by soldiers in the Thousand Day War. Krefft hates this constant reminder of the war, so refuses to wear it. Instead, he has created a custom exoskeleton, which provides most of the mobility and strength improvements of a full suit but without the encumbrance, or the protection. He considers himself a tracker, who chases down his prey with skill and cunning, not simply brute force. In addition to his distaste for them, a battle suit would reduce Krefft's senses and awareness too much.

He feels a great affinity to the land and its past. When not actively participating in The Bloodharvest, Krefft takes long journeys into the irradiated heartland of the former Australia, walking the glass fields for days at a time. On his return, he chooses to retain some of the radiation burns, as a testament to the pilgrimage: these have built up over time, permanently scarring his skin.

His most notable feature is the huge gash that splits his face in two. This was acquired when a Scavenger, struggling for his life, slashed Krefft with the limb of his Vambrace. Again, Krefft chose not to repair the wound, wearing it as a constant reminder not to get complacent, or to underestimate his quarry.

If he had his way, the Brisbane Enclave would be sealed up and the outsiders turned permanently away. Until then, he will track down those who dare to encroach on his land, flushing them from their hiding places and eradicating them.