"A single, well-placed shot can change the world."

The Stalker, also known by her real name, Eve Barnes, is a hunter in the Garden. Her unique power is Fade, and her default loadout is a Sniper Rifle and a Burst Rifle.

The Stalker is a methodical hunter; she’s equipped to accurately eliminate her targets from afar or to effectively take down scavengers at point blank.

The forests of the Deathgardens, though artificial, can be dark and forbidding places. The weight of ancient power can seem to drip from every branch. Eyes regard you from the shadows and an attack can come from any direction, at any time.

There is movement. Leaves rustle and you catch a glimpse of antlers passing by. You feel the impact and you hit the ground before you hear the crack of the gun. Your blood drains into the mossy floor as a pointed shadow looms above you.

The Stalker has forever made you a part of her forest. 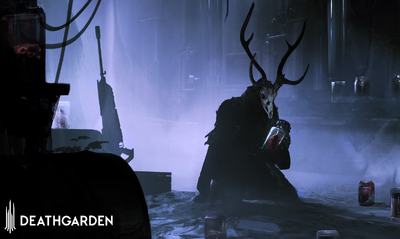 Eve Barnes feels most at home among the forests of the Deathgardens. Though the trees may be artificial, she maintains that she can hear the ancient spirit of the woods calling to her, through the vast spans of time. Before each match, she has a Garden printed, spending time there alone, walking among the trees and speaking to the wind.

While not hunting in the Trials, Barnes is a sniper, tasked with protecting the New York Enclave from those who would try to gain entry. She strikes from great distances, her target's dead on the floor before the sound of the shot even reaches them.

When the Enclaves were formed and the walls went up, she and her family were on the outside. They all attempted to enter via The Bloodharvest, and that was when she first felt the power of the woods. Drawing upon it, she was able to achieve her goal and gain entry into The Enclave; the rest of her family were unable to do the same and were forced to return to the ruins.

Knowing that she would never see them again, she turned her back on the past and threw herself wholeheartedly into Enclave life. Barnes dogged The Enclave's Hunters, until she found Ethan Dawson, an older Hunter who was willing to listen to her rambling discourse on the power of the forest.

He took her on as an apprentice, trained her in the art of using a battle suit, and then gifted her with his when she was ready. She finally entered The Bloodharvest as a Hunter and her new life began.

Like all Divided Hunters, Eve Barnes lives for the blood and violence of battle, reveling in the misery and desperation of the Scavengers. For the select few, she provides a special 'honor', plunging her hand into the downed Scavenger's chest and ripping out their still-beating heart. These she preserves in glass jars that she wears at her waist. Although the Scavengers can have their hearts replaced, Barnes is convinced that she takes a part of their essence with her, keeping it close and drawing power from it.

She is a force of nature, a disciple of the Deathgarden, and a feared opponent. Whether she's at distance or at arm's length she will hunt down the Scavengers, and the soil of the Garden will be nourished with their blood.